Learn to Save Money and Energy: Video Games and Consoles

Video game consoles consume a “staggeringly high” amount of energy, according to a report the Natural Resources Defense Council is releasing on Wednesday. How much electricity do they use each year? About as much as it takes to power the city of San Diego.

There’s plenty of room for improvement. We can cut our nation’s electricity bill by more than $1 billion and avoid 7 million tons of carbon dioxide emissions each year, according to the report.

How much can you personally save? Depends on what brand you choose. The Sony Playstation 3 and Microsofts Xbox 360 use as much as nine times more energy than the Nintendo Wii.

Habits play a crucial role as well. The systems use nearly the same amount of power when they are turned on and idle as they do when you are actively playing a game or watching a movie. If left on continuously, the Playstation 3 or Xbox 360 will consume the same amount of energy as two new refrigerators over the course of a year.

Here’s how the three major brands stack up against each other: 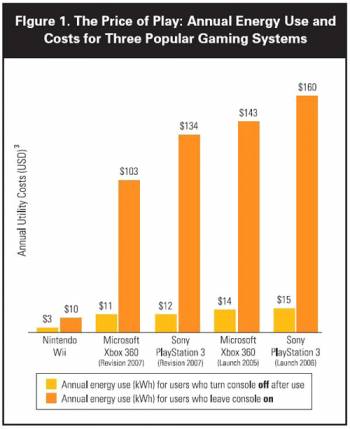 The comprehensive report outlines significant changes industry needs to make. For now, though, here’s what consumers can do to make a difference.

Written by: Paul Shuteyev
I am an internet-marketing specialist.

A young voice of digital marketing, obsessed with the top content creation.